What are some common cat illnesses & symptoms? 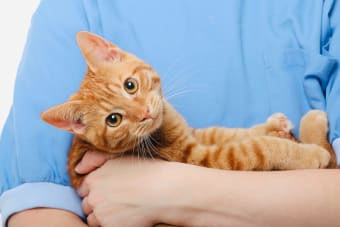 Cat illnesses and their effects might be worrying, or even deadly if left untreated. Our Kent vets offer information on the signs and symptoms of common illnesses.

What Are Some Common Illnesses In Cats?

Here are 3 common illnesses you, as a cat owner, should be aware of. Cats tend to instantly self-isolate when sick, so it is especially important to be prepared to visit your vet if required.

Your cat's throat, nose, and sinuses (also known as its upper respiratory tract) can get infected by viruses and bacteria. These kinds of illnesses are often passed around in multi-cat households or shelters. Something as simple as sharing a food or water bowl is enough for a cat to contract illnesses such as feline herpesvirus and feline calicivirus.

Cats can transfer these illnesses to other cats by sneezing, coughing, or during grooming.

Symptoms of this group  of infections include:

Diabetes mellitus develops in cats who are not able to produce enough insulin to balance their blood sugar and glucose levels. If it is not treated, Diabetes can lead to severe symptoms such as:

If not adequately controlled, diabetes can lead to health problems such as nerve disorders and a shortened lifespan. Treatment focuses on managing this condition through insulin injections.

Uncontrolled cell growth causes cancer, which can affect numerous organs and cells throughout your cat's body. The disease first develops within a cell. After that, it connects to the tissue below your pet's skin where it can potentially spread through their body.

In cats, a common contributor to cancer is Feline Leukemia Virus, which is diagnosable. Factors such as environmental toxins can also cause cancer. If caught early in its development, your vet may be capable of treating cancer in your cat.

Numerous treatments such as surgery, radiation, and chemotherapy can be attempted depending on the extent, developmental stage, and location within the body of a tumor.

What Should I Do If My Cat Is Ill?

If your cat is ill and showing the symptoms listed above, you must bring them to your vet as soon as possible for a physical exam. At Afford-A-Vet Animal Clinic, we have an on-site pharmacy and in-house lab, and urgent care services which all aim to provide you and your pet with the care they need.

Do you suspect your cat is ill? Our experienced vets can diagnose and treat many common illnesses and conditions. Contact Afford-A-Vet Animal Clinic today.

Caring for Pets in Kent